The history of punting

Cambridge is a great destination for long and short breaks, but there’s more to this city’s fascinating history and heritage than its academic fame. The city offers so much to do and to see, just take a look at the latest events to enjoy in Cambridge. But it’s the traditional art of punting that makes it onto every visitor’s itinerary.

Going punting during your trip to Cambridge offers an easy way to learn more about this must-visit destination. The view from your punt is incredible whatever route you choose to take, with this boating experience providing a great view of some of the sights you may just miss when travelling on foot, by bike or in a car. Punting is relaxing, romantic and the ultimate bonding experience if you’re travelling with friends or family, and it’s been that way for as long as we can remember. Punting has a rich history, a history that we’ll explore in great detail in this blog post.

Punting isn’t as old as many people think. It may look like a traditional activity that’s been done since the dawn of time, but its origins can be traced back to the 1800s, which is relatively new considering the significance of punting in Cambridge life.

Punts (the flat-bottomed boats used for punting) were originally cargo boats used to transport larger items that were difficult to move on smaller vessels. Thanks to their wide structure, punts could carry a lot of weight. It wasn’t until midway through the 19th century that they began carrying passengers and took on the role that they are better known for today. 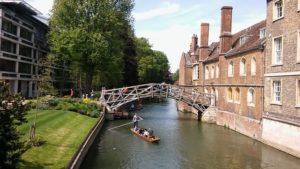 Punting was a popular pastime

During the 19th century, punting became a fashionable way to tour many UK cities. It was thought to have been popularised, not on the River Cam, but in the lower level areas of the River Thames. It came to Cambridge much later, with many accounts – including this one from TheCambridgeStudent – accrediting one man with the city’s introduction to punting:

“This practice first came to Cambridge in 1903 with Maurice “Jack” Scudamore’s building of the first punt in Cambridge at Chesterton Boatyard during his boat-building apprenticeship. Jack’s pioneering introduced the pleasure punt to the Cambridge College Backs, a concept that was furthered as river traffic diminished and punting became safer, more popular and an indulgence – especially during the summer months.”

The punting that we know and that Jack introduced to Cambridge more than a century ago is often referred to pleasure punting, and it’s never been more popular. Punting in the modern day however doesn’t come without its challenges. The local council now enforces strict rules for those punting or running punting tours throughout the city.

You can currently enjoy punting on three parts of the river. The middle and higher areas where punting is permitted are popular with visitors and locals looking to enjoy punting in all its glory. The lower part of the river is reserved for competitive meets and events.

Whichever part of the River Cam you end up taking to your punt on, meandering through Cambridge by boat is the only true way to see this great city and all the beauty it offers.

Whether you are staying with us for business or pleasure, we encourage all our guests to try punting at least once. We offer free punting as part of our award-winning accommodation package! Contact us today to find out more.