The history of Cambridge

As the base of one of the oldest universities in the world, it’s safe to say that Cambridge has a long and colourful history. Cambridge is however much older than its famous university, as much of its beautiful, historic architecture reveals.

In this blog post, we celebrate all that’s great about the city’s history and heritage, as well as reveal how you can discover more on your upcoming trip to Cambridge.

The birth of a modern city

The Cambridge that we are familiar with today was founded back in 875. Before this point, Cambridge was the site of various settlements during the bronze and iron ages.

It was during this time that the famous Castle Hill, often referred to locally as Castle Mound, was constructed. Here, Cambridge City Council explains more about Castle Hill’s importance in history and use today:

“Although there are no ruins to be seen on Castle Hill, this grassy mound is of great importance in the history of Cambridge. This was the site of the Roman town of Duroliponte, originally an Iron Age hill fort. It is worth climbing to the top of the Castle Mound as it offers an expansive view over the rooftops of the town and surrounding countryside. On a clear day, it is possible to see Ely Cathedral to the north.”

The modern city of Cambridge was founded by Danish conquerors who settled and created the town here due to its strategic position and ditch-like surroundings.

The Danes ruled until the 10th century when the city was taken by Saxons. Shortly after the Saxon capture, the city’s wooden, thatched buildings were set ablaze by their Danish rivals.

Cambridge rises from the ashes 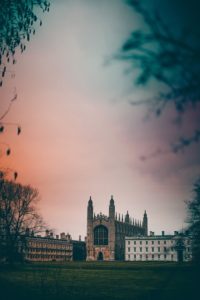 Whilst the wooden, thatched buildings were easily destroyed, the city was also easy to rebuild due to this very reason. Following its rebuild, the city established itself as a town of importance, and by 1086 sported a 2,000-strong population. This grew to 3,000 by the Middle Ages.

This wasn’t the last revival of the city. According to historic records, the city succumbed to fire in 1174 and again in 1385. But the city prospered regardless of these incidents.

During the medieval times, Cambridge became renowned for its weekly markets, excellent transport links by boat (the River Cam connected the city to another important town of its time, King’s Lynn, via the Great Ouse), and its leather industry.

The birth of Cambridge University

Cambridge University was founded in 1209 to not only capitalise on the recent success of the city’s commercial community but to house Oxford students who had taken refuge in the city.

The influx of scholars saw the university grow from strength to strength educationally. The city wasn’t always so welcoming to its student population, however.

As in Oxford, many of the townspeople were against students. Students often caused disturbances and the townspeople retaliated by charging them higher rent and increasing food prices.

The situation became so difficult that King Henry III had to step in. He took students under his protection from 1231 to safeguard them from exploitation, and ensure they were sufficiently housed and fed. Find out more about life in Cambridge’s medieval university.

That was just a brief snapshot of Cambridge’s early history, there’s so much more to discover about the city’s past. The best way to dig a little deeper into historic Cambridge is to visit the city’s many museums.

The Fitzwilliam, Museum of Archaeology and Anthropology, Museum of Classical Archaeology, Kettle’s Yard, Whipple Museum, Sedgwick Museum of Earth Sciences, Museum of Zoology, and the Scott Polar Institute are just some of the museums that you can explore. Visiting one of these museums is the perfect way to spend a rainy day in Cambridge and stay bang on budget during your city break.

Taking a guided tour by bike, punt or boat is another route to negotiating the exciting history of this famous city.